Mixed media on paper, 2018-2020. The title for this series is taken from The Mattachine Society, one of America’s earliest gay rights organizations. Formed in Los Angeles, 1950, the group’s name was inspired by French medieval and renaissance masque groups studied by a founding member while preparing a teaching course: “One masque group was known as the ‘Société Mattachine.’ These societies, lifelong secret fraternities of unmarried townsmen who never performed in public unmasked, were dedicated to going out into the countryside and conducting dances and rituals during the Feast of Fools, at the Vernal Equinox. Sometimes these dance rituals, or masques, were peasant protests against oppression—with the maskers, in the people's name, receiving the brunt of a given lord's vicious retaliation. So we took the name Mattachine because we felt that we 1950s Gays were also a masked people, unknown and anonymous, who might become engaged in morale building and helping ourselves and others, through struggle, to move toward total redress and change.”— Jonathan Katz, Gay American History. Crowell Publishers, 1976 Rendered with meticulous detail and a tightly controlled palette of reflective metallics and jabs of color, the figures’ faces in these works are obscured by paint, plants, shadows, or invented by the artist in the process of creating the work (with a few exceptions; for example, the artist serves as an undisguised model twice in the series). These are private men lost in thought - endlessly waiting, communing with exotic birds, tangling through overgrown flora - unaware they are being watched. Our voyeurism exists somewhere between subjective appreciation and blatant objectification while lush surroundings further emphasize an unknowable unfamiliarity, like creatures found in nature. Complexly encoded in gay culture, anonymity has always found use as camouflage; for safety, for privacy, as an added layer of sexual thrill, or to namelessly seek validation of one’s aesthetic beauty. This series explores these ideas while addressing contemporary experiences of anonymous intimacy, the sensationalism of the modern male nude, and how we actively curate our physical and emotional visibility in an overwhelmingly visual world. 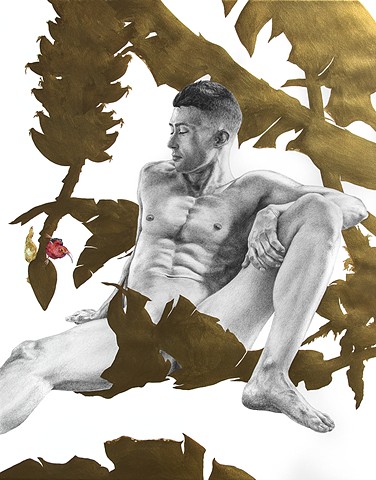 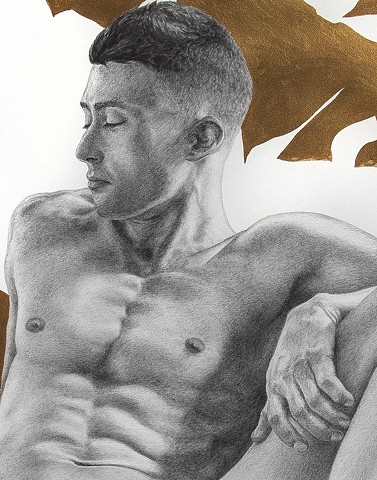 The Mattachine (He Talked, Sometimes for Hours) - detail 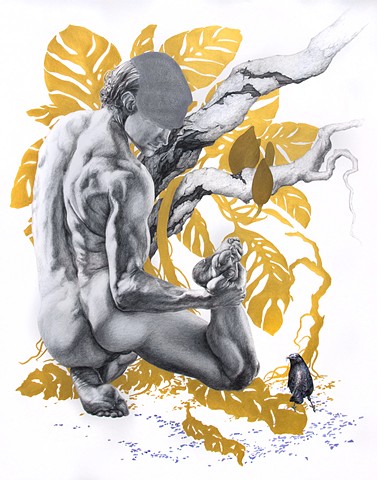 The Mattachine (He Became Part of a Private Collection)
graphite, metallic acrylic, and watercolor on Rives BFK paper
42" x 33" 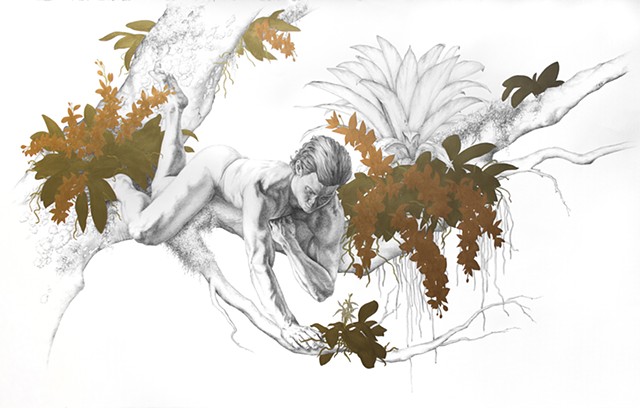 The Mattachine (He Felt Most Himself in the Treetops)
graphite,metallic acrylic, gel medium on Rives BFK paper
42" x 68" 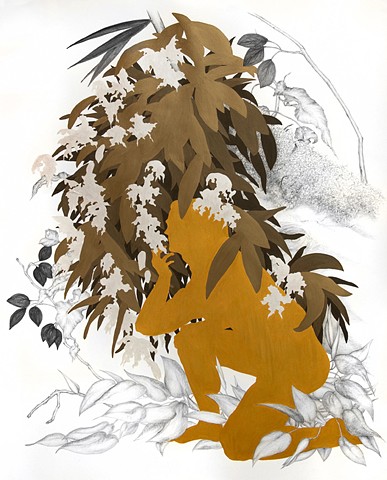 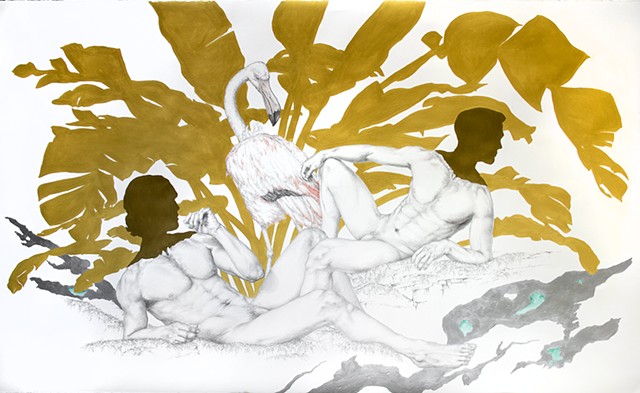 The Mattachine (He Startled a Pair of Lotuseaters with Tales of Jazz-Age Berlin)
graphite, metallic acrylic, watercolor on Rives BFK paper
42" x 70" 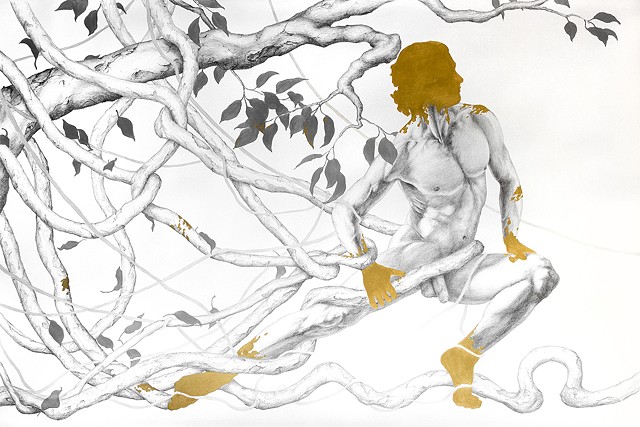 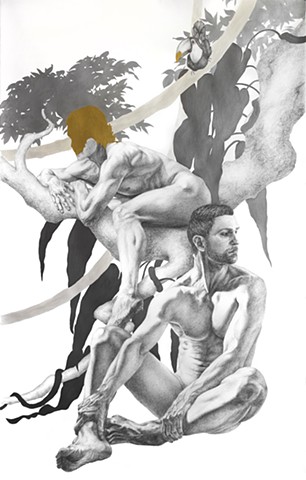 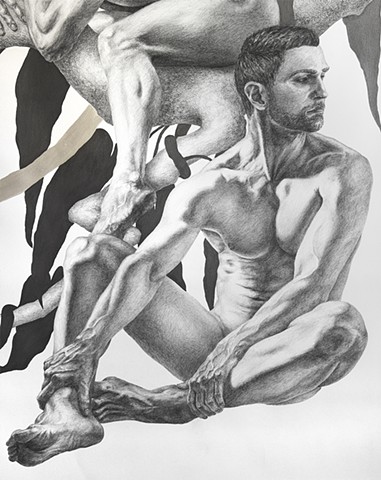 The Mattachine (He Found Friends Among Lost Boys) - detail 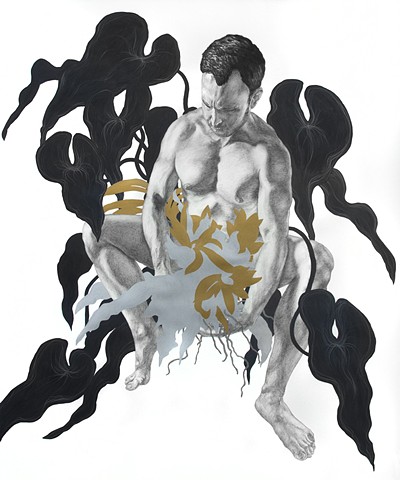 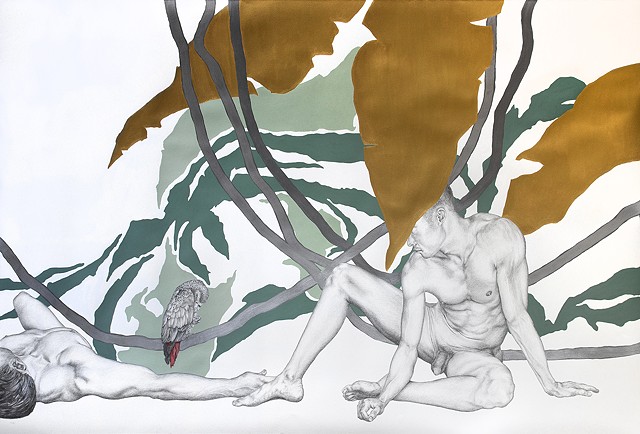 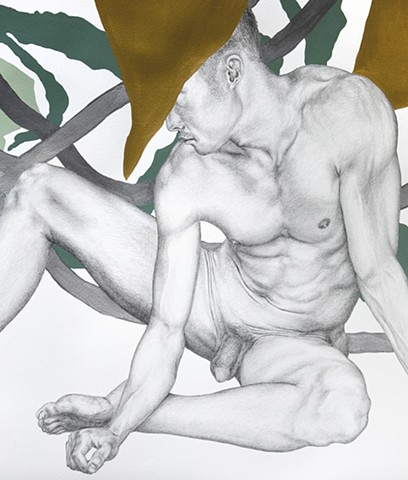 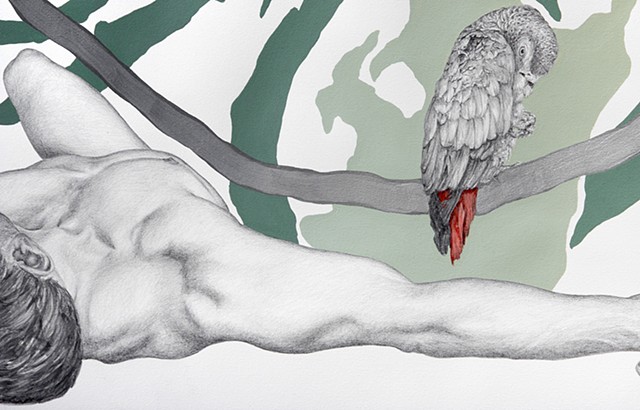 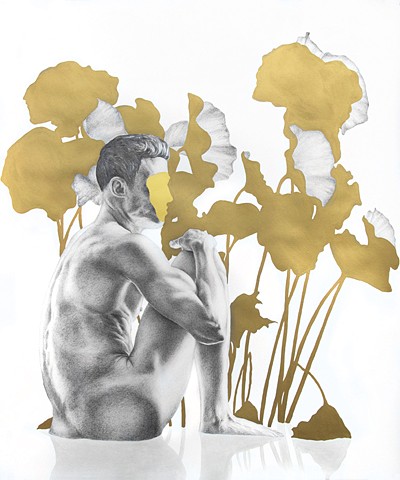 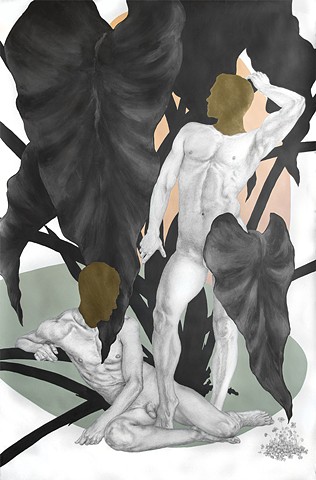 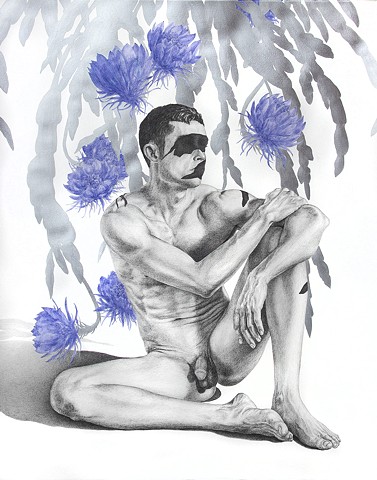 The Mattachine (He Waited Through the Night)
graphite, metallic acrylic, watercolor on Rives BFK paper